Hello...... Hope you've all enjoyed your half term.
Yet again another week has flown by...... it's been an odd week for me. My trip to Cardiff was very long due to the travelling. Unfortunately I didn't get do to any shopping :( I passed loads of good shops but I only had 15 mins before the meeting started. I was then told it would finish at 3pm..... yippee, I could fit in loads of shopping!!! But there's always one smart arse that asks loads of question at the end.... you know the sort of person I mean? .... I'm sat there thinking 'just shut up' but no it's one question after another & before we knew it it was nearly 5pm!!! No time to do anything before my parents collected me :(
My mum sent me this picture via email
Great isn't it? It sums me up very well!
I do find it really hard to get going sometimes so I sit & do nothing!
Then I worry about everything I need to do & end up rushing around. I sometimes feel like I'm plate spinning...... what with a very full time job, housework, selling my makes, making things & Make, Do and Mend..... it all gets to much!
I guess that's what it's like being a women!!!! Thank goodness I don't have any children!
I do like the look of the little fella in the picture.....so cute :)
This is what I've made this week.... 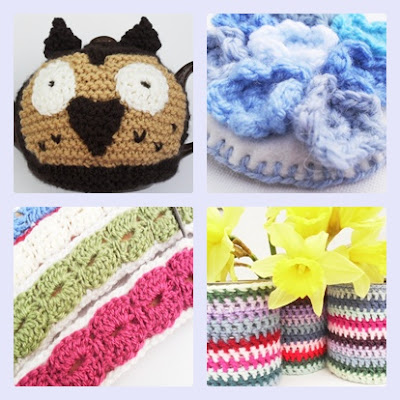 I better pack for Make, Do and Mend on Tuesday night.... I'm working tomorrow so I want to get organised tonight.... although I've only been home from work for a couple of hours!!
It's going to be a busy one this month as I've had 26 people confirm attendance.... gulp!! That's a lot of people.... I hope they don't all want to learn crochet!
Back soon, have a good week

Just popping in to show you my latest edition to my ever growing Ladybird book collection.... 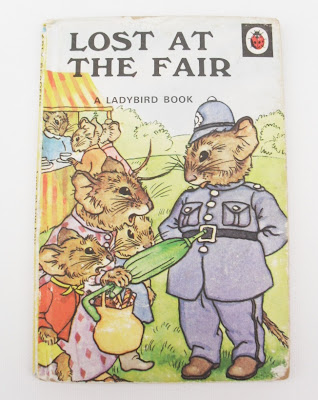 I don't remember this one..... do you?
I always find a ladybird book when I go to Oxfam but I was giving up hope & was just about to leave when I spotted it.
Some beautiful pictures inside.... 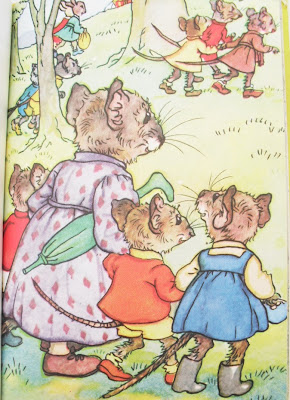 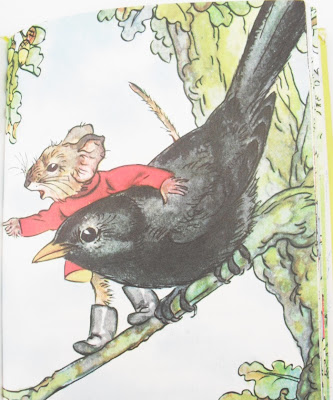 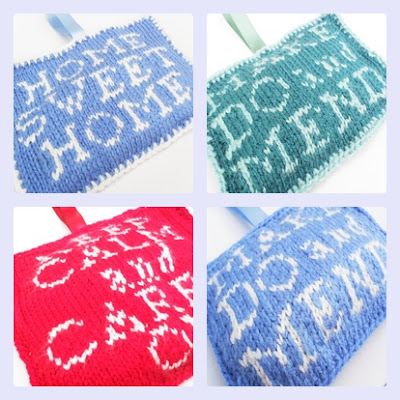 It's been very rewarding using my lavender that I spent hours dying last summer!
I've added them to my Folksy shop this week.
Another spring picture to make you smile 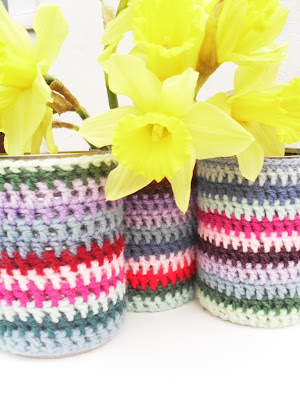 Off to Cardiff today for a meeting...... hoping to find time to check out the charity shops as I've heard they're very good! My parents are very kindly driving me so I don't have to put up with the 3 hours each way train journey! So hopefully it won't be such a long day.
Back soon

I'm back!!
I hope you all had a good week & a lovely Valentine's day. We don't do Valentine's day here but I hinted on Facebook that I had seen a lovely necklace & I got it!!! 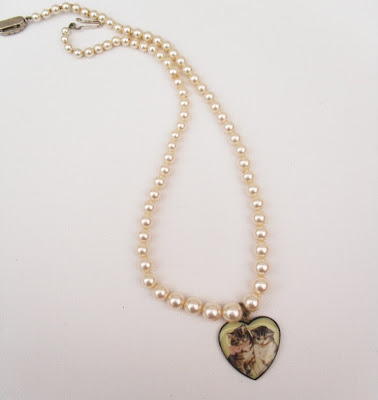 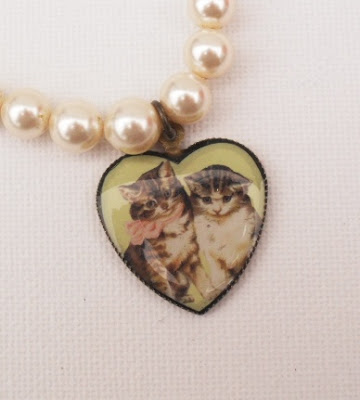 Cute isn't it?? I love Victorian cats with bows :)
The only problem is I have a neck like Mike Tyson so it's really tight, I guess it's meant to be a choker but this is silly. Any ideas how I can make it bigger?
He brought it from one of my favourite Folksy shops........
Silk Purse, Sow's Ear
Eilidh keeps tempting me with her beautiful jewellery.... I'm not a big jewellery fan but I keep finding things! I've just seen she's made earrings to match the necklace.....ooohhh I want!!!
This is my 2nd necklace.... the first can be found here .... I've also brought a stag brooch & earrings as well as a few Christmas presents.

In the garden today I spotted these.... 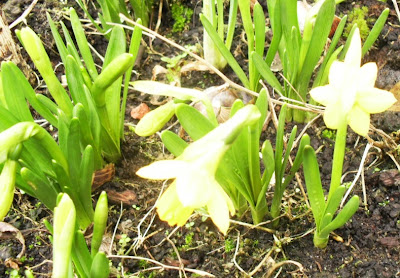 Something to make me smile & remind us that Spring is on the way.... hooray!!!
OH update: after a stressful week OH seems to be getting better.... another hooray!!
Back soon

Hello, I hope your week has been a good one :)
Just to let you know I did make it to France!
I didn't decide until the last minute...... in fact the taxi came 20 mins before the train left! I hope it was a nice surprise for OH as he had already gone to the station.
I didn't feel great but after a few drinks my cold started to go..... it's the new miracle cure....cider!!!!!
We watched as the boat came in... 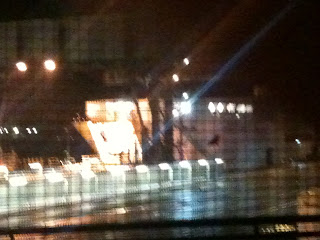 It's all a bit blurry!!!
As soon as the engines started I started to feel odd..... I could never go on a cruise! It's such a weird feeling but I took some travel sickness tablets then headed to our cabin.....very small!!!..... we woke to the sound of music informing us we only had an hour!!! A quick shower then out on deck to see us come in to port.
Now we did have a plan....... our friend was already in Roscoff at his parents house & he was returning on the same boat back. So the plan was he would be at the port at 8am to meet us, take us to the town for breakfast then we would drive to the house & see a bit of the country side......well that was the plan!!!!
He wasn't there so armed with just €17 we went to the cafe to wait for him.....he had spare €'s so we didn't need to get anymore. We waited & waited...... 4 coffee's & 2 croissants later & the money had all gone!!!!
At about 9.30 we decided to walk to town, it said it was 15 mins away, to find a cash point.
Have you been to Roscoff??
I guess it's just a stop off point as there is nothing & I mean nothing there!!! The market was on so we had a wander around but it was cold & the walk had been up hill, we just needed a sit down & a hot drink.....getting old!!
After finally finding a cash point we headed to a bar ...... €6.50 for a coffee & a coke!!!! 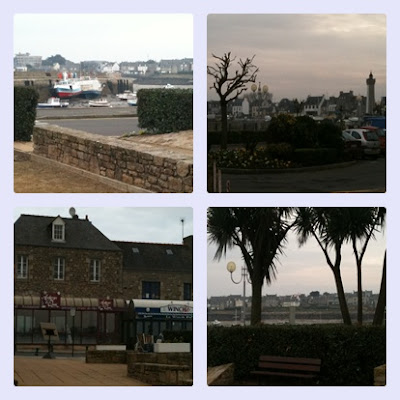 As you can see it wasn't sunny France but at least it wasn't raining! It wasn't as bad as it looks in the photo's. Our friend finally turned up at lunch time by which time we had started on the beer! Well there wasn't much else to do.........
Funny bar snacks around here.....

No I didn't try them..... I know they're suppose to be lovely but I'm sorry they look like garden snails & that's just wrong!!
Before we knew it it was time to head back to the port.... thankfully in a car.... & board the boat. 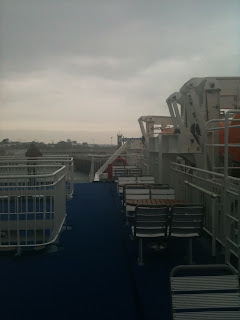 Bye bye Roscoff...... not sure I'll be back!!!!
We had a cabin again on the way back so after food & a few more drinks we settled down for an afternoon nap :)
So that was my holiday...... I did have a good time & I'm glad I went. Although I must be getting old as I was so worn out on Thursday!
Unfortunately OH has been ill since returning :(
He had a really high temperature on Thursday PM & was having problems breathing, we thought it was a chest/lung infection so called the doctors on Friday. Having told him the symptoms he was told to go to the surgery straight away, after rushing there he was then told that as he smokes there was nothing they would do.
So he's been in bed since then, unable to move, eat or sleep...... I keep checking he's still breathing but it's very laboured. If he's no better later I'll call the NHS helpline but no doubt they'll say the say thing.
For the last 3 days I've been pottering around the house, cleaning, watching TV & making things...... not all bad!!!

I've been listing daily on Folksy so this little lot should see me through when I return to work tomorrow :(
After a glorious day yesterday the rain is back so it's more TV & making for me today!
Until next time

At last it's my week off!!! It started yesterday after working the whole weekend, I had a lovely day yesterday doing nothing! Well I did clean the fridge but the rest of the day was taken up with TV & knitting..... perfect!!!
I've been really busy making things over the last week as I try to list daily on Folksy.
This is what I've made so far... 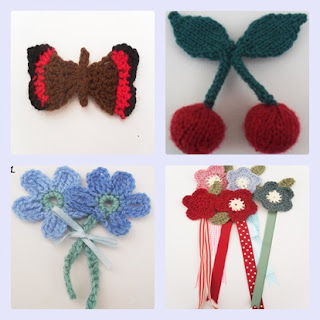 I've sold a few cherry brooches so needed to make more, these will be great for the Retro Ruby Fair I'm attending in April.
Do you want to see how my journal is coming on?

I'm trying to do at least one thing a week so it doesn't end up in a cupboard! This is something I've never done with a book before.... 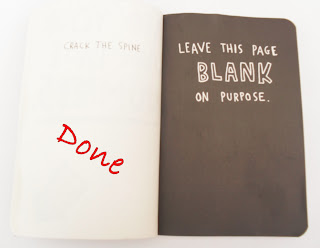 It took some doing, that spine was a tough one! If you count the leave this page blank that's another one to tick off!
The last thing I did..... 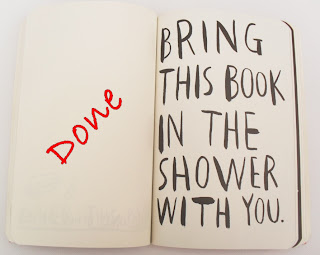 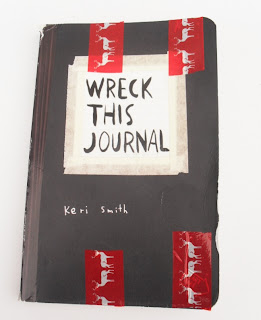 It's starting to look a little dog eared now but I'm liking it :)
I'll let you know what I do next.
Today I'm suppose to be sailing to France, we leave late tonight from Plymouth & return tomorrow early evening. Just a quick break for something to do, the price was very good so we thought why not..... it'll be nice to have breakfast in France!
However when we booked it last week we forgot it was February & the weather isn't good....no wonder it was cheap!
Checking the weather yesterday it said gale force 6, now I'm rubbish on boats & rarely use them so what should I do???
I've also woken up with a start of a cold..... grrrr I was so looking forward to doing something! My head tells me to stay home, nothing worse then feeling sea sick with a bad cold & having to spend 6 hours in a french port..... :(
I'll be back later to let you know if I was brave & to show you more of my makes.

We're already 1 month into 2011.... how did that happen?
But that means spring is waiting around the corner.... hooray!!
January is always a tough month as it tends to be a bit miserable which isn't helped by the media telling us nearly every day this is the worse day of the year...etc...etc!
Here's a look back over my January.... 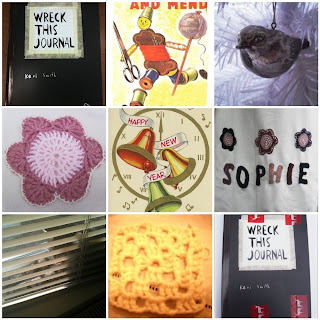 We've had a few sunny days which Nanny has enjoyed.... see bottom left!
A sneak preview of the blanket I made for Kelly's baby...... she should have it now so I can share :) The flower pattern is from Rose.
I'm not working today which is great because the sun is shining!
I have lots of jobs, one being to empty the Make, Do and Mend bags from Tuesday night....wow it was a busy one & when I got home at 10pm I didn't have the energy to put everything away. I'll also be sorting out all the admin, I hate that job as it's so time consuming but hey it's only once a month.
I did see The Kings Speech..... I loved it! My sort of film, great story, great acting & no stupid special effects! Did anyone else well up at the end??? I really want to see it again which is very unlike me..... looking forward to the DVD coming out. Fingers crossed for Colin Firth on Oscar night.
Hope you're all having a great week ...... back soon as I'm on holiday next week.....yippee!!