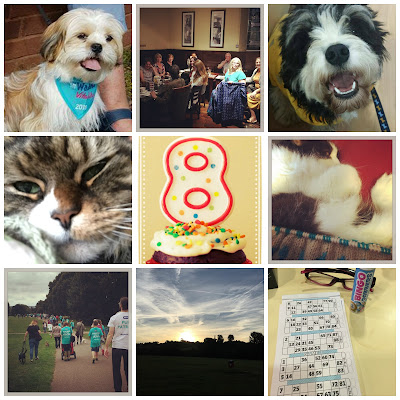 I'm so behind....... it's nearly the end of October & I'm only just posting about September.

At the beginning of the month I received a bomb shell as OH has decided to sell the house for financial reasons. I knew it was coming but hoping it wouldn't. Anyway I had a cut off date of 29th October & I'm still here!! I can't find anywhere that will take cats so OH has left & I'm still looking. We think I can stay here until April so fingers crossed something turns up before then.

So September was a blur really, I've not been able to walk due to the darker mornings & to be honest weight loss & fitness are the last things on my mind.
I celebrated my volunteers 50th birthday with the team, attended the RSPCA Big Walkies, another trip to the bingo with my sister as a late birthday treat, spent time with the cats, knitting my Home Fires fair isle jumper & celebrating 8 years in Blogland.

I would love to say October was better but that's another story for another post!!